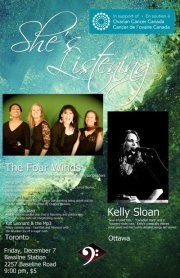 We the Four Winds Collective (independent artists Kat Leonard, Arlene Paculan, Meghan Morrison and Heather Hill) played a fundraising event for Ovarian Cancer Canada last Friday night with local artist Kelly Sloan at Bass Line Station in Ottawa, Ontario. Mike Anderson of CanadaParties.ca organized the event.  As the Winds traveled the 401 east, we discussed our issues with supporting certain types of charity fundraising events. We agreed that we are not as interested in supporting organizations that are backed by pharmaceutical companies as much as we want to support the charities that are lean, agile and creative and not backed by organizations that serve to benefit from the illness and its treatments.

Upon arrival at Bass Line Station we met Lynn Griffiths, who has been an active volunteer for Ovarian Cancer Canada since losing her dear sister Ann to the disease in 2007.   The Four Winds were pleased to learn that Ovarian Cancer Canada is not backed by pharmaceuticals and relies heavily on volunteers and donations to help raise awareness and funds for research.  Lynn had all kinds of literature for us and she shared some incredible information.

When Corinne Boyer succumbed to ovarian cancer in 1997 at the age of 57 years old, she left an enduring legacy.  Corinne’s husband, Patrick Boyer, created the Corinne Boyer Fund to advance ovarian cancer research and awareness.  In 1999 the name was changed to National Ovarian Cancer Association (NOCA). In 2002 the name was changed to Ovarian Cancer Canada, and it remains a member-based and funded organization. There is a research chair at the University of Ottawa as well as one that was added recently in Toronto.

Every year, 2600 Canadian women are diagnosed and 1750 women succumb to ovarian cancer.  What is most difficult is that there is no test to screen for whether you have ovarian cancer, and the symptoms are incredibly generic and subtle and very easily missed. And ovarian cancer must be treated early to increase the chances of successful healing.  Lynn mentioned that one of the risk factors is ovulation, that the more you ovulate the greater the risk of ovarian cancer.  So women who have not given birth and are not on the birth control pill could be at greater risk for developing ovarian cancer.

What every woman NEEDS TO KNOW – or tell a woman you love!

▪   A Pap smear does not detect ovarian cancer

▪    Recent research has found that a large proportion of ovarian cancers actually start in the fallopian tubes rather than the ovaries. If you are having gynecologic surgery, ask your doctor whether or not removal of the fallopian tubes would be beneficial to you. For more information, visit ovcare.ca

▪   Pain in the abdomen is not necessarily a symptom of ovarian cancer – even if you have no pain, your doctor cannot rule out ovarian cancer

▪  Even though ovarian cancer is known as the “disease that whispers” the majority of women with ovarian cancer report symptoms, including women diagnosed at an early stage

▪   Ovarian cancer rates rise after menopause, peaking from age 60-75, although it can occur at any age

▪   The hereditary form, found in families where many close relatives have had breast and/or ovarian cancer, tends to occur at an earlier age

The Four Winds enjoyed a warm night of music and amusement with Lynn and the staff of Bass Line Station as well as friends and audience who came out to join us.  We were thrilled to learn that many of the audience members donated very generously to Ovarian Cancer Canada and we were happy to donate proceeds of CD sales to the important cause.

Please do inform yourself about ovarian cancer and its symptoms as well as other insidious diseases, and please share information with your friends and loved ones.  As the Ovarian Cancer Canada tagline states: Knowledge is Power. 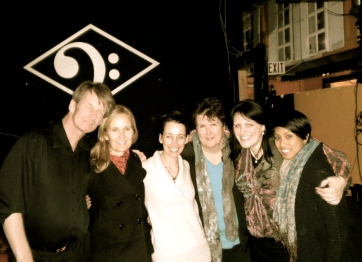 And now, for your listening pleasure, please enjoy two of the Winds’ cancer-inspired tunes: How Long by Heather Hill and Fuck Cancer by Kat Leonard.

Be well and be informed.

Love, Heather and Kat
(Two of the Four Winds Collective) 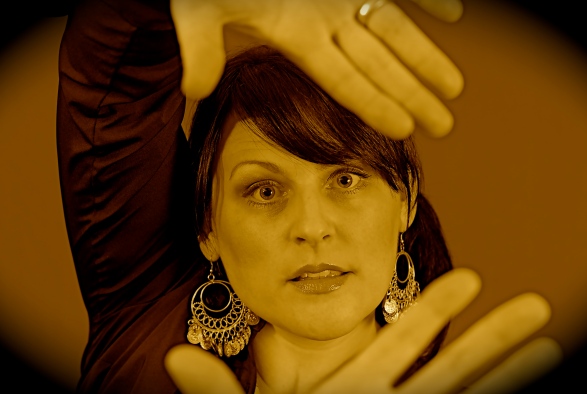