It doesn’t matter what shenanigans I get up to while visiting LA– seeing Ayumi Iizuka and Doug Morency is always a Hollywood-heavy highlight!

This LA trip I was thrilled to be seeing Ayu and Doug perform as part of the Canadian improv group The EH Team at Second City LA. And, as always, Ayumi and Doug upped the thrillometer by generously inviting me onstage to perform alongside them and their group mate Marc. Oh, what fun! It was a thrill to be onstage with them again!

Me with Ayumi Iizuka and Marc Hickox of The EH Team, Second City, LA!

I’ve always admired these bright stars, and back in 2008 I featured both Ayumi and Doug in my column East End Artists in the late local newspaper etc… news. See my earlier blog for Ayumi’s feature here.  As for Doug’s, eyeball this! 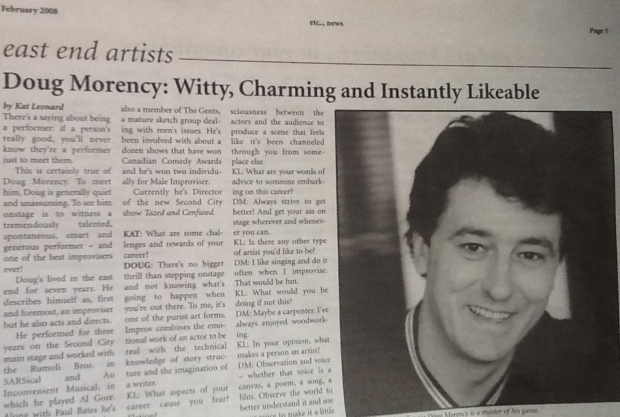 To meet Doug Morency offstage you may find him generally quiet and unassuming. To see Doug onstage is to witness a one-man storm, a tremendously talented, spontaneous, smart and generous performer and one of the best improvisers… ever! Doug is an improviser, actor and director. In Toronto he spent three years as part of the Second City Toronto mainstage cast and followed that by directing for the mainstage as well as the National Touring Company. He was part of the hugely successful award-winning Drowsy Chaperone, An Inconvenient Musical and SARSical. He also created the much-adored duo The Williamson Playboys with Paul Bates as well as the tongue-in-cheek religious duo The Kupps with Ayumi Iizuka. Doug has been involved with a dozen shows that have won Canadian Comedy Awards, and won two individually for Best Male Improviser.

Since my initial interview with Doug in 2008, he has moved to LA, bought a house, and taken up ownership of Connect Studios LA, casting director workshops studios, while he continues to act, write and improvise. Some  of his recent LA highlights include: a role on Criminal Minds, multiple performances on Jimmy Kimmel Live, a role on a cartoon network show called You’re Whole, teaching at the Second City LA, directing, performing in a showcase called Google My Tweet, won Best of Fest and Best Troupe at the LA Comedy Fest with The EH Team, started musical sketch duo Morezuka with Ayumi Iizuka.

And now, Doug’s East End Artist interview which I conducted with him way back in 2008:

KAT: What are some challenges and rewards of your career?
DOUG: There is no bigger thrill than stepping onstage and not knowing what is going to happen when you are out there. To me, it is one of the purest art forms. At its best, improv spontaneously combines the emotional work an actor does to be real in the moment with the technical knowledge of story structure and imagination that a writer utilizes.
KAT: What aspects of your career cause you fear? Elation?
DOUG: I am a little fearful every time I step on the stage to improvise. That fear is a great motivator. I feel elation on those occasions when it seems that you have tapped in to a collective consciousness of the actors you are performing with, and the audience, to produce a scene that feels like it has been channelled through you from someplace else– not controlling the scene but running like hell to keep up with where the scene is taking you.
KAT: What are your words of advice to someome embarking on this career?
DOUG: Always strive to get better! And get your ass onstage wherever and whenever you can.
KAT: Is there any other type of artist you would like to be?
DOUG: I like singing and do it often when I improvise. That would be fun.
KAT: What would you be doing if not in this line of career?
DOUG: I dunno, maybe a carpenter. I’ve always enjoyed woodworking.
KAT: In your opinion, what makes a person an artist?
DOUG: Observation and voice– whether that voice is a canvas, a poem, a song, a film, or whatever creative vehicle you choose. Observe the world to better understand it and use your voice to make it a little better for everyone.

Doug Morency is a rare and multi-faceted gem. He has many talents and he uses them brillliantly. Armed with wit and charm, he is instantly and lastingly likeable onstage and off. If you EVER are blessed with an opportunity to see Doug perform, don’t eff it up!  See him! The joy from the experience will vibrate in your system for a very good long time and will make you a healthier person forevermore. For more on Doug and even some video snippets, visit: www.DougMorency.com!

A series of Artist Features

In an effort to recommence my series of feature artists, I begin by highlighting artists I featured in my column East End Artists that existed in the late local paper etc… news.

Ayumi Iizuka is a magnetic personality as she engages with a stunning smile and electrifying twinkle of the eye.  She’s smart, funny, multi-talented and extremely generous in laughter and spirit.  In addition to a busy career in the arts, Ayumi also opens her heart and home to dogs waiting for adoption, through a dog-fostering program.  She is a true lover of life and an active dream chaser.

She has an Honours Joint Specialist Degree in Political Science and Philosophy, and also a diploma in Computer Graphics.  She worked as a 3D computer animator doing special effects for commercials and movies but knew the entire time that she belonged on the other side of the camera.

Since my initial interview with Ayumi in 2008, Ayumi has moved to LA, bought a house, and taken up ownership of Connect Studios LA, casting director workshops studios, while she continues to act, write, improvise and foster dogs.

KAT: What are some high points in your career?
AYUMI: Playing Bob Hoskins’ mistress in Hollywoodland.  The role was small but it was exciting to sit at a table with Bob Hoskins, Ben Affleck and Diane Lane.
KAT: Challenges and rewards of your career?
AYUMI: Rejection and money come to mind immediately to answer the first part of the question.  Rejection and money come to mind for the second part of the question.
KAT: Any words of advice to someone embarking on same career?
AYUMI: As everyone in the business told me when I decided to get into it, “If there’s something else you would be just as happy doing, do that instead.”  I think that once you decide to do it, though, it’s important to persevere.  Stay busy and create your own opportunities if they aren’t finding you.
KAT: In your opinion, what makes a person an artist?
AYUMI: Parental condemnation and a burning desire to do what you want in spite of the odds of success.
KAT: What is your favourite quote?
AYUMI: “What would you attempt if you knew you could not fail?”
KAT: What amuses you?
AYUMI: Guitar Hero 3 and cuteoverload.com
KAT: What makes you laugh hysterically?
AYUMI: Doug Morency (Stay tuned for East End Artist Doug Morency edition!)
KAT: What makes you sad?
AYUMI: Homeless or abused animals… actually, that makes me angry.  I care about homeless and abused people too, but aren’t we all animals?
KAT: What makes you worry?
AYUMI: The overall state of the planet and the people who are in charge.
KAT: What is your most simple delight?
AYUMI: Hanging out with my man and my dogs.
KAT: What are your pet peeves?
AYUMI: Zero tolerance, tyranny of the majority, and people who don’t signal.

KAT: Would you rather: be too hot or too cold? AYUMI: Too HOT!  KAT: Be thirsty or hungry? AYUMI: Thirsty.  KAT: Be hungry or stuffed? AYUMI: Stuffed, any day!  KAT: Live hectic or bored? AYUMI: That’s a toughy!  Probably hectic.  KAT: Read or write?  AYUMI: This writer says read.  KAT: Make dinner or clean up after? AYUMI: Make dinner.  KAT: Eat sweet or savoury? AYUMI: Can’t the world have both at once?  KAT: Watch sunset or sunrise? AYUMI: Sunset.  Do you know what ungodly hour the sunrise happens?!  How can you enjoy it if you’re still asleep or still pissed off at someone for making you wake up so early?!

It is a true pleasure to be in the company of Ayumi Iizuka, a successful and enthusiastic artist who is also a big-hearted and inspired person.  You can find out more about Ayumi on her website: www.aiizuka.com