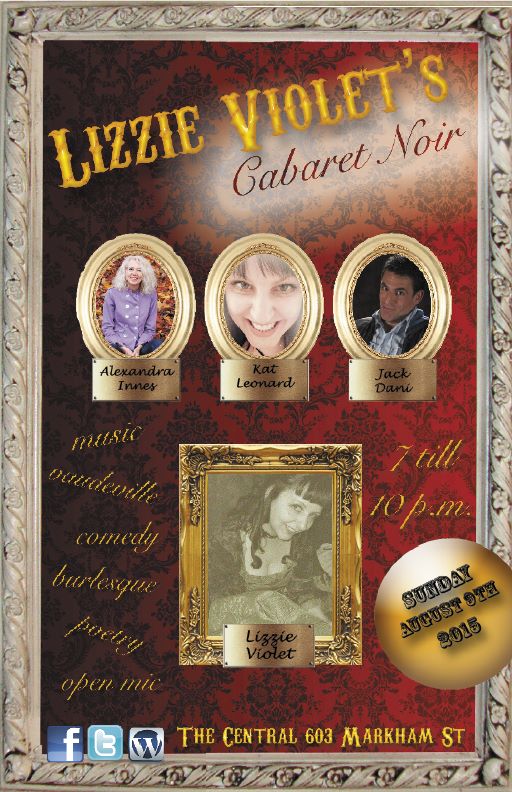 Lizzie Violet’s Cabaret Noir is a monthly event that brings you an evening of indie artistry and cabaret. The mistress of ceremonies, Lizzie Violet will introduce cabaret stylings such as poetry, Spoken Word, music, Burlesque, comedy and a variety of other vaudeville style acts. Inspired by Vaudeville of the early 1900’s, it will be an evening of pure entertainment.

Each monthly event will have three features that consist of one part poetry (spoken word and slam as well), one part music and one part vaudeville (burlesque/magic/comedy). A night of frivolity and entertainment for all. Lizzie Violet’s Cabaret Noir will be the second Sunday of every month at the The Central on Markham Street, from 7 pm to 10:30 pm. Keeping with the theme of cabaret’s roots, music will be unplugged, poetry will be edgy and the vaudeville will be sassy!

We will have limited open mic spots (for poets, performers, comedians, burlesque and musicians). Sign up starts at 7.

This is a PWYC event. (the door suggested price $5 and up)

Each show you will be greeted at the door by our our absolutely amazingly dandy and handsome ToPoet.ca! (make sure to check out his website and poetry)

Alexandra Innes: half-Scottish but born in London, England, has lived and written in the British Isles, Montreal and Toronto. A poet by compulsion, her poems tell candid, sensual, accessible and unvarnished stories about life, love, sex and spirituality… among other things…

Jack Dani: Multi-talented comedian and musician; Jack Dani brings a unique brand of humor to the stage that combines a wonderful physicality and animated personality with clever story-telling, impressions, impersonations and songs. He is visually entertaining on stage as he shares personal experiences such as bringing his dad to get his passport renewed or the time he was mistaken for being a gay man by an Asian manicurist. He also incorporates musical comedy into his set. Jack hosted “The Bad Boyz of Comedy” show to a sold out audience at The Toronto Centre For The Arts, and was featured on a CBC documentary entitled, “Who Wants To Be A Comic?” He also just released a full length self titled debut comedy/music/skit CD with 16 tracks available on itunes, cdbaby and Amazon. His youtube channel is loaded with videos; such as music videos of tracks from the CD, prank call videos, stand up comedy and sketch comedy where Jack plays different characters. He was also a 1st place winner in the Russell Peters Best Funny Five contest held with Sirius Radio in which he opened for Russell at Caesars Casino in July of 2010. Jack can be seen performing his brand of stand up throughout Canada as a featured performer.

Kat Leonard (that’s me!): has a degree in Science, a diploma in TV/Film Production and is a graduate of The Second City Conservatory. Kat is a motivational entertainer with a musical comedy slant. She is currently developing her next show, Myselfie, which she will tour in classrooms and beyond to promote healthy body image and self-esteem. Kat is Artistic Director of Let’s Make Good Productions and WonderFest, the festival of workshops and concerts spreading empowerment through art.

Hope to see you there!